the day was too golden to spend inside the lab, so wans and i snuck off to meet kenny for plain vanilla bakery cupcakes and the usual tea/dinner hybrid. i thought it would only take an hour at most, but by the power of wan lin’s trusty pink car, as well as our unyielding appetite for richer, sweeter afternoons, we ended up moving on to a bench in the pandan valley barbecue area with three forks and two slices of pie, pondering over the benefits of a graham cracker crust, and engaging in pie politics over who gets the last piece — a game i’m happy to play! later on, a golden retriever picks up slippers with his teeth and gives them to us as an invitation for a tug-of-war game, and wans and i go sun-chasing at the park i’ve never known of. a little boy shows me the shell he’s found by the breakwater and scampers off to find more. we walk on, and find clouds that look like hockey players, pest controllers and smoke.

not quite sure i know how to make sense of days like these. they are beautiful, no doubt, but they are also thick and heavy — with summer heat and the promises (or threats?) of the formless future. can we continue to devour life by the forkful when it doesn’t have a shape or name? 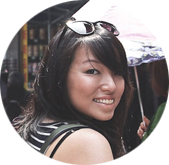 Jules, a 23 year old psychology researcher & occasional writer from Singapore, with a penchant for clever things and classic style.